The Gunfighter and The Gear-Head

The Gunfighter and The Gear-Head 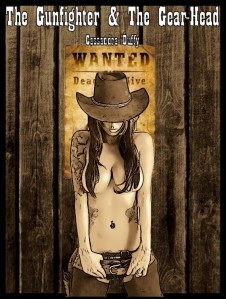 An apocalyptic alien invasion set humanity on the edge of extermination. Unable to match technology with the invaders, humanity bet their existence on their physical strength overcoming. In a desperate last stand by the world’s greatest scientists, the cataclysm electromagnetic pulse wiped out all technology on the planet, stranding the aliens on earth, effectively locking them in the cage with the beasts of humanity that remained. Using pre-industrial weapons of war, the surviving humans fought back…

Six years later, Gieo, the self-proclaimed last pilot on earth, was shot down yet again. She finds herself in the unwelcoming post apocalyptic old west town of Tombstone, the guest of the beautiful gunfighter Fiona with a turbulent history. Their budding romance hits an immediate snag when Fiona’s mysterious past finally catches up with her, bringing with it old flames, hot grudges, and a rekindling of the war with the aliens that had cooled to a stalemate.

Sky-captain Gieo and her fleet of steam-powered dirigibles are humanity’s best chance to turn the tide of the war against the alien invaders, but only if Fiona can protect her from blind cultists, jealous ex-girlfriends, and a town of apocalypse cowboys with suspect sanity.

Available on Kindle and Nook and iTunes

Comments Off on The Gunfighter and The Gear-Head