← The Vampires of Vigil’s Sorrow 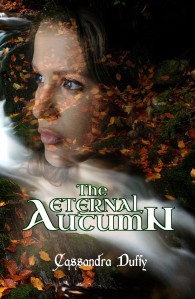 Time has frozen. The leaves of autumn refuse to fall, frost clings to the ground, and the last harvest took place more than a year ago. Vaelandria is gripped by the Eternal Autumn, and some say it is the end of days. Starvation and madness spread across the countryside even as corpses climb from their graves, goblins raze villages, witches fly through the darkest nights, and ghosts rise to haunt the living.

As many have come to believe the child of three Goddesses is the source of the Eternal Autumn, Calista and Harper struggle to protect their fated daughter from unseen enemies. They flee to the Valley of the Hallowed Harvest where the Eternal Autumn is celebrated as a holy sign only to find the citizens of the valley are every bit as dangerous as those they thought to escape.

In the war torn north, the Dagger Falls Company is hired to discover the source of the Eternal Autumn and hopefully end it. Led by Sofea, the former North Wind Valkyrie, the company takes to the road in hopes of gleaning answers from the Thief Queen of Griffon’s Rock, the mystical Ogre of the orchards, and a long-dead dragon. Unlikely aid for their impossible task comes from an escaped Cyclops bear, a flirtatious Brownie bandit, and a sarcastic Witch of the Nightshade Coven.

Amid the insanity sown by the Eternal Autumn, assassins skulk through the night, mask-wearing cultists roam the forests, and divine powers tear at the very fabric of reality. While the world decays under the sinister beauty of the Eternal Autumn, Calista and Harper slowly unravel the mystery to find frozen time is a harbinger of something far worse.

Available on Amazon (Kindle and Paperback) Kobo and Nook

Cassandra Duffy a.k.a. Lizzy Dark is a native Southern Californian, born on a balmy spring day of 1990. She spent most of her childhood being precocious, which stopped being entertaining or impressive when she grew into an adult, at which point she had to start being precious. Her first collection of short stories, “Demons of Paradise” was published by Day Moon Press in January 2011. She writes a free-lance sex advice column found in various lesbian magazines, and has graciously accepted the title of “Sexpert” from her editor in Australia, with whom she has not had sex. She lives and writes in Orange County with her partner and soul mate Nichole and their two cats: Dragon and Josephine.
View all posts by cassandraduffy »

← The Vampires of Vigil’s Sorrow